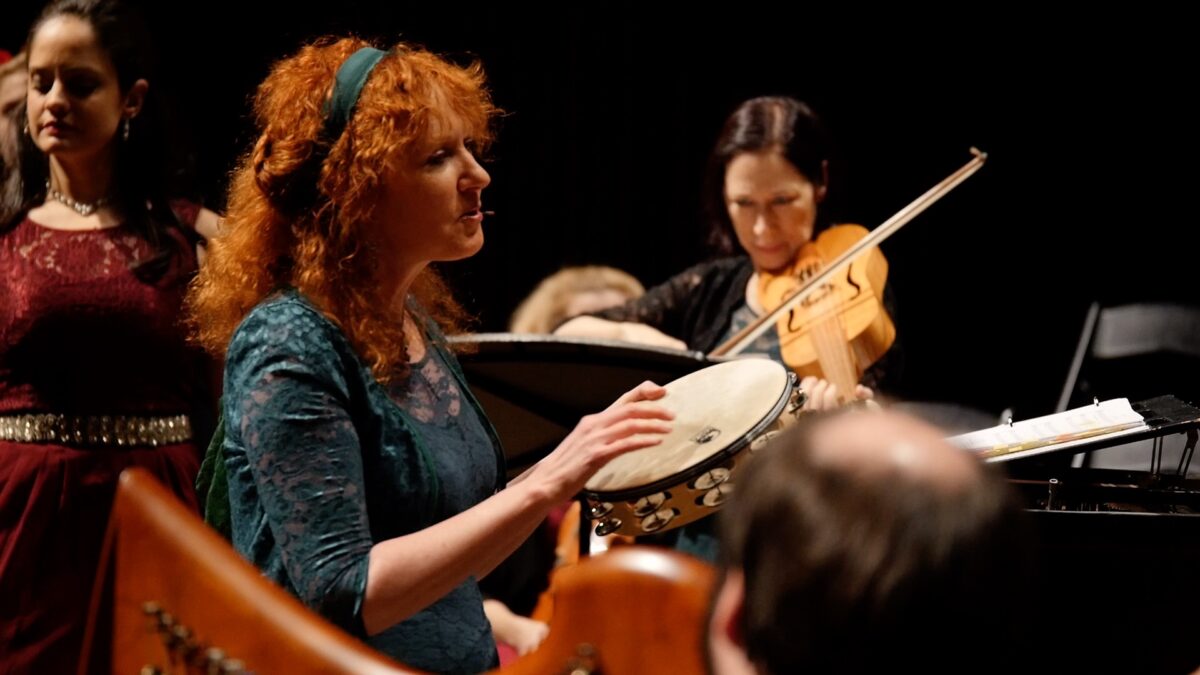 The latest holiday program from GRAMMY®-award winners Jeannette Sorrell and Apollo’s Fire is a communal celebration of the American immigrant experience, sharing the spirit and history of Appalachia’s Irish and Scottish roots through music. The 35-member ensemble includes 10 children and brings a joyous concert experience with the warmth of period instruments. Fiddlers, medieval harp, hammered dulcimer, bagpipes, singers, and children’s voices join together to evoke the Celtic roots of an Appalachian holiday. In this one-hour special, the listener is transported from Christmas Eve in medieval Scotland to the folk carols and shape‐note hymns at a toe‐tapping Christmas gathering in Virginia. The people of the Appalachian Mountains welcome Christmas with LOVE, SINGING, DANCING, and PRAYER.

This concert program has played to sold‐out audiences in Cleveland and has toured to the Metropolitan Museum of Art in New York. The 2018 CD release of this program was called “Festive Disc of the Year” by GRAMOPHONE, and debuted at #3 on Billboard Traditional Classical Chart (Nov. 2018). With exceptionally produced sound, inviting hosts, and deeply moving performances, this special will appeal to families and listeners young and old. The special is hosted by WFMT’s Candice Agree and conductor, harpsichordist, and Artistic Director of Apollo’s Fire, Jeannette Sorrell. The special is produced by Rebecca Nystedt of WFMT.

Photos, concert reviews, videos, and a preview of the album can be found in the Supplemental Materials folder for the program (located in the sidebar)

Apollo’s Fire is a GRAMMY®‐award winning period‐instrument orchestra based in Cleveland, Ohio. Founding director Jeannette Sorrell (also a GRAMMY® winner) has led the ensemble in sold‐out concerts at Carnegie Hall, the BBC Proms, the Royal Theatre of Madrid, the Tanglewood Festival, the Ravinia Festival, London’s Wigmore Hall, the Metropolitan Museum of Art in New York, the Library of Congress, and more. Apollo’s Fire is dedicated to reviving the true spirit of baroque performances – not only with period instruments, but with the emotional impact the music was meant to convey. Sorrell is praised for her “inspired leadership” (THE INDEPENDENT, UK) and “revelatory performances” (OPERA NEWS). With over 16,000 YouTube subscribers and over 5 million “views,” Apollo’s Fire has a worldwide following.

Jeannette Sorrell, Artistic Director of Apollo’s Fire and co-host of this radio special, is an award‐winning conductor and harpsichordist. Sorrell is the subject of the 2019 documentary PLAYING WITH FIRE: Jeannette Sorrell and the Mysteries of Conducting, directed by 2‐time Oscar winning director Allan Miller. The film tells the story of how Sorrell overcame various hurdles as a young woman conductor – including her job interview for the position of Assistant Conductor with The Cleveland Orchestra, when Maestro Christoph von told her he would not allow her to audition with the orchestra because “the audience in Cleveland would never accept a woman as conductor.” She has also been featured on the video‐interview series, Living the Classical Life; and in an hour-long live interview with audience at the Tanglewood Festival.

Candice Agree joined WFMT in 2013, and hosts weekday afternoons on air. She began her radio career as an intern for Howard Stern at WNBC and continued as a music host in Washington, DC (WETA) and New York City (WQXR, WNCN, WNYC, Sirius). An off-camera announcer with CBS News since 1998, she can be heard on “CBS Evening News” and “CBS Sunday Morning,” as well as “Sunday Morning on the Radio,” and the “Sunday Morning” and “Mobituaries” podcasts. After studying theory and composition at Eastman School of Music, Candice received a degree in Russian from Barnard College. A Foundation for Iberian Music Contributing Scholar, her weekly program The Spanish Hour has been distributed nationally since 2010 via PRX.