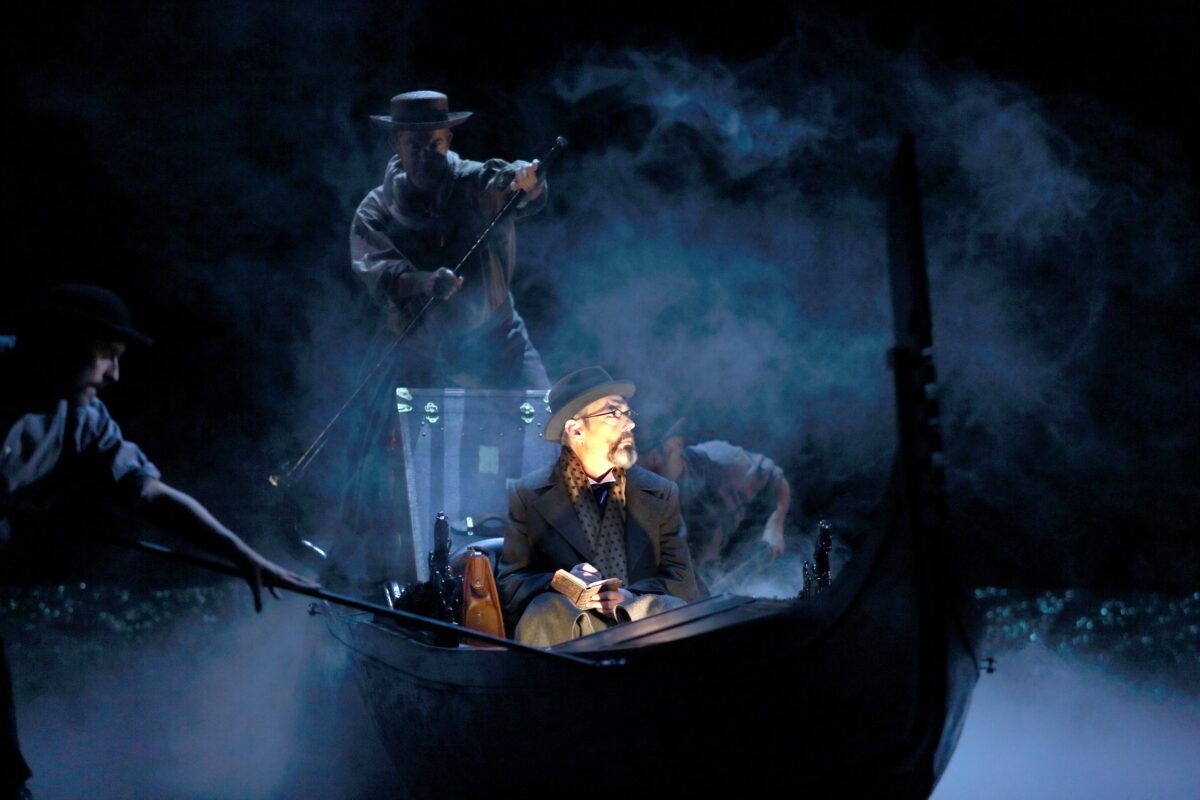 Above: Gerald Finley as the Gondolier and Mark Padmore as Aschenbach in Death in Venice Credit: Catherine Ashmore

The 2020 WFMT Radio Network Opera Series continues with five excellent productions from London’s Royal Opera House (UK). Presented in partnership with the European Broadcasting Union and the BBC, the line-up from Covent Garden includes Beethoven’s Fidelio, Mozart’s Don Giovanni, Britten’s Death in Venice, Donizetti’s Don Pasquale, Massenet’s Werther, and Handel’s Agrippina. The Royal Opera House and BBC have graciously provided brief summaries for each of the operas (below), which you are welcome to use on your websites, social media, and elsewhere.

Beethoven’s only opera is a masterpiece, an uplifting story of risk and triumph. In this new production, conducted by Antonio Pappano, Jonas Kaufmann plays the political prisoner Florestan, and Lise Davidsen his wife Leonore (disguised as ‘Fidelio’) who daringly sets out to rescue him. Set in strong counterpoint are the ingredients of domestic intrigue, determined love and the cruelty of an oppressive regime. The music is transcendent throughout and includes the famous Act I Quartet, the Prisoners’ Chorus and Florestan’s impassioned Act II cry in the darkness and vision of hope. Tobias Kratzer’s new staging brings together the dark reality of the French Revolutionary ‘Terror’ and our own time to illuminate Fidelio’s inspiring message of shared humanity.

Don Giovanni is the second of Mozart’s landmark collaborations with librettist Lorenzo da Ponte (after The Marriage of Figaro and before Così fan tutte). In it they created a work that has beguiled and entranced in equal measure since its premiere in 1787. Perfectly situated, as no other opera, between tragedy and comedy, this potent drama combines glorious music with a seductive central character who is endlessly fascinating in his complexity.

Kasper Holten’s 2014 production for The Royal Opera casts Don Giovanni as an artist who thrives on an audience enticed by his creative gifts. The visually spectacular set by award-winning designer Es Devlin features ingenious video designs by Luke Halls which provide an insight into the characters’ thoughts and emotions. But at the production’s heart are the beauty and invention of Mozart’s dazzling score.

The unique resonance of Venice in 1913 is the setting for Britten’s intense and atmospheric opera about a burnt-out, middle-aged writer obsessed with youth while haunted by death. David McVicar’s major new production is the first of two Britten operas this Season, part of The Royal Opera’s ongoing Britten cycle, and features a strong contingent of British artists, headed by Mark Padmore as the troubled Aschenbach, with Gerald Finley in the multiple roles that persistently foreshadow mortality. This is a real ensemble piece, with many individualized roles and dance integral to the story, not least in the form of the young man who is the focus of Aschenbach’s disturbing desire. Richard Farnes conducts Britten’s final opera, which returns to The Royal Opera for the first time since 1992.

Royal Opera favourite Bryn Terfel heads the cast for this new production of Donizetti’s comedy of domestic drama across two generations. The witty story of a middle-aged man whose supposed young wife runs rings around him – with her own ulterior romantic purpose in mind – has long delighted and surprised audiences, not least as presented with the sparkle of its music and the virtuoso skill of its performers. Damiano Michieletto’s exhilarating production shows how contemporary the characters still are and how immediate and touching the story remains.

Jules Massenet began thinking about making an opera from Goethe’s Die Leiden des jungen Werthers (1774; The Sorrows of Young Werther) as early as 1880, before he started work on Manon – though in his memoirs he claimed inspiration came in 1886 during a visit to Bayreuth to see Wagner’s Parsifal. He began the score in 1885 and finished it in 1887, but Werther’s premiere did not come until 1892, when the Vienna Hofoper requested another Massenet work after the success of the local premiere of Manon. It has been a permanent part of the international repertory since 1903. Werther and Manon have proved Massenet’s most enduringly popular works.

The excellent libretto, prepared by Edouard Blau and Paul Milliet, distills Goethe’s Romantic masterpiece – their shortened version intensifies and makes more romantic Goethe’s depiction of two passionate people who inadvertently cause each other pain. Its spareness affords Massenet the opportunity to make his music not only delve into the psyches of the central couple but also describe the damage they cause to Sophie and Albert. The score displays Massenet’s gift for melody, with the ‘Clair de lune’, ‘Lied d’Ossian’ and Charlotte’s Act III soliloquy now some of his most loved music. Director Benoît Jacquot’s 2004 production for The Royal Opera, with elegant set designs by Charles Edwards, makes manifest the opera’s theme of keeping up appearances while torrid passions rage beneath.

Handel’s early masterpiece, Agrippina, is a gripping drama of high politics and low deceit set to some of the composer’s most ravishing music.

On hearing that her husband, the Emperor Claudio, has died in a storm at sea, Agrippina plots to secure the throne for Nerone, her son by a previous marriage.

Agrippina is the first in a long line of fascinating female characters that Handel portrays with acute psychological depth, portraying both her magnetic charm and steely ambition. In this production by Barrie Kosky from the Royal Opera House, Covent Garden, Joyce DiDonato heads a cast of leading Handelian singers accompanied by the Orchestra of the Age of Enlightenment under Maxim Emelyanychev.

This opera is brought to you through the European Broadcasting Union, by way of the  British Broadcasting Corporation (BBC).