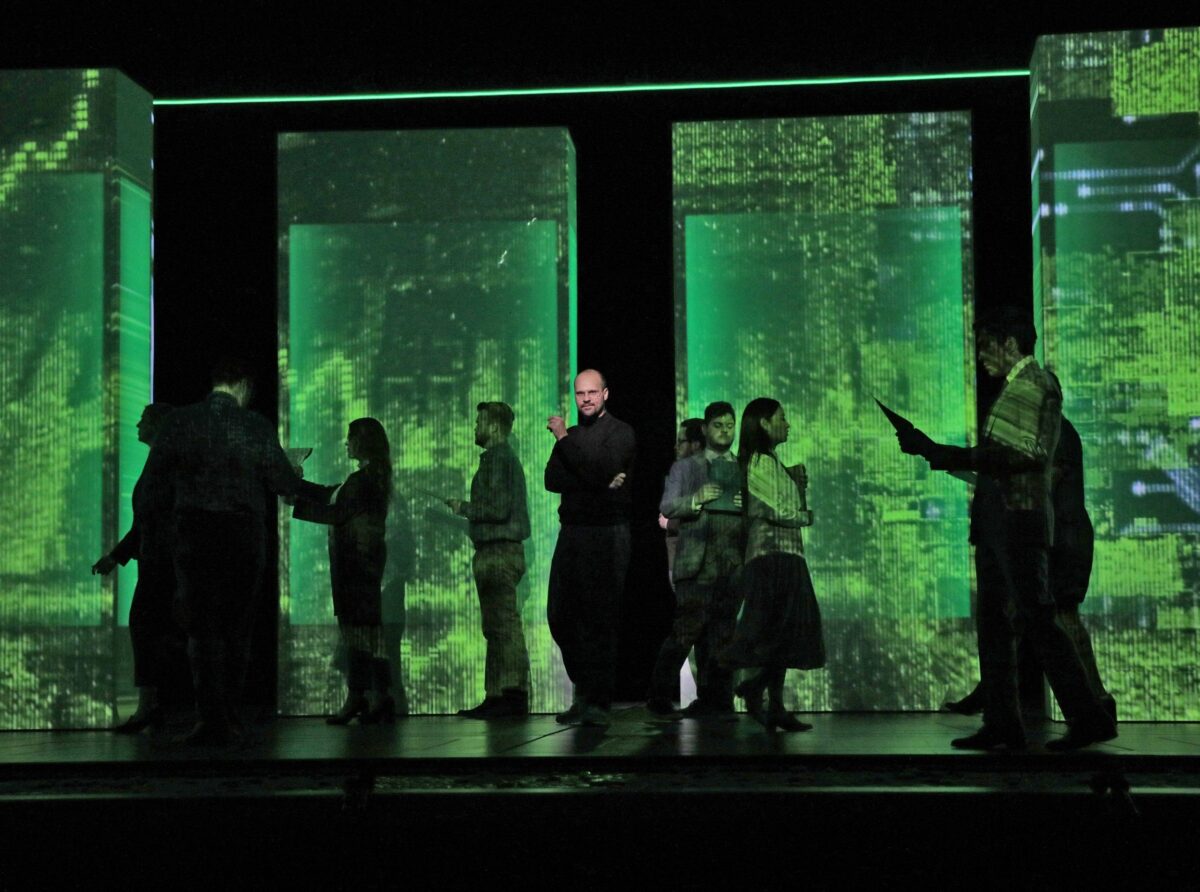 Above: Production photo of The (R)evolution of Steve Jobs Credit: Ken Howard

The 2022 WFMT Radio Network Opera Series begins with Santa Fe Opera’s production of The (R)evolution of Steve Jobs by Mason Bates. Heralded as “a triumph” (Washington Post), and “a winning opera” (Los Angeles Times), Bates’ score combines electronics and operatic orchestration to tell a fascinating story about the complicated man behind the rise of a tech giant.

The (R)evolution of Steve Jobs begins at a critical moment in Jobs’ life and circles back to examine the people and experiences that shaped one of the most influential figures of our time: his father’s mentorship, his devotion to Buddhism, his relationships, his rise and fall as a mogul, and finally his marriage to Laurene Jobs, who showed him the power of human connection. Mason Bates, a genius at combining traditional symphony orchestra with electronic sounds, composes this world premiere opera with master librettist Mark Campbell.

Given the current expansive grounds, it can be hard to remember that The Santa Fe Opera’s first spread was only 76 sparsely developed acres. Previous incarnations had included a pinto bean plantation, a mink farm, and a pig farm. When founder John O. Crosby first visited, it was a rustic but comfortable guest ranch that had welcomed many musical luminaries — including conductors Efrem Kurtz, Fritz Reiner, Joseph Rosenstock, and Herbert von Karajan, and the married duo of soprano Lily Pons and conductor André Kostelanetz.

When Crosby took over the property in September 1956 on an initial three-year lease, it was thanks to a $200,000 investment from his parents, Aileen O’Hea Crosby and Laurence Crosby. From then on, the organization has marched through time showing accomplishments and meeting challenges — always guided by fiscal discipline, steered by constant strategic planning, and devoted always to uncompromising creative values.

Through the years, one thing has stayed the same, even as the grounds have grown and new buildings have sprung up: the unparalleled acoustics. They are as fine today as when Crosby and acoustician Jack Purcell rode over the grounds in a Jeep — or as some oral history has it, on horses — and fired guns (or perhaps a yacht cannon) to find the ideal sonic “bowl” in which to site the house.

Those acoustics have served a vastly varied and still growing repertory: some 2,000 performances of 170 operas by 85 composers, including 17 world premieres, 45 American premieres, and almost every opera by Richard Strauss, to whose works Crosby was devoted. The 17th world premiere came in 2021, with The Lord of Cries by composer John Corigliano and librettist Mark Adamo.

Indeed, the Santa Fe Opera’s site is like no other. Early on, TIME magazine called the complex “one of the handsomest operatic settings in the Western Hemisphere.” To The New Yorker, it was a “miracle in the desert.” More recently, The Washington Post dubbed it a “shining white cloud in the red hills.” To The Wall Street Journal, the company “…feels like the Rolls- Royce of American summer opera festivals.” And the Philadelphia Inquirer has lauded it as “one of the most beloved venues in the country.” With recent major renovations now completed, such tributes carry even more power.