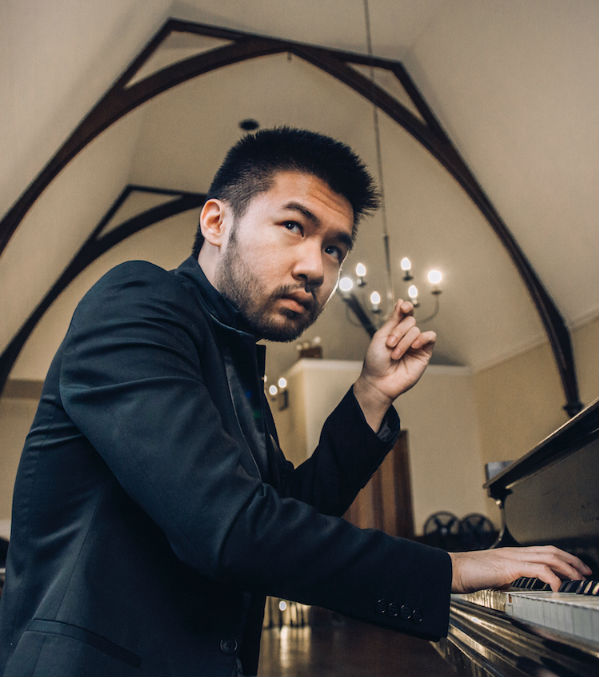 Conrad Tao has appeared worldwide as a pianist and composer, and has been dubbed a musician of “probing intellect and open-hearted vision” by the New York Times, a “thoughtful and mature composer” by NPR, and “ferociously talented” by TimeOut New York. In June of 2011, the White House Commission on Presidential Scholars and the Department of Education named Tao a Presidential Scholar in the Arts, and the National Foundation for Advancement in the Arts awarded him a YoungArts gold medal in music. Later that year, Tao was named a Gilmore Young Artist, an honor awarded every two years highlighting the most promising American pianists of the new generation. In May of 2012, he was awarded the prestigious Avery Fisher Career Grant.

Tao’s 2016-17 season begins with the world premiere of David Lang’s new opera the loser at Brooklyn Academy of Music in September, where he will join baritone Rod Gilfry atop elevated platforms suspended in air, performing to a mezzanine-seating-only audience. From there, Tao oversees the premiere of a new orchestral work, I got a wiggle that I just can’t shake, commissioned by the Pacific Symphony; premieres a new piano concerto commissioned by the Atlantic Classical Orchestra; debuts the second work of his commissioned by Jaap van Zweden and the Hong Kong Philharmonic; and performs with the Giuseppe Verdi Orchestra in Milan, the Nashville Symphony, the National Arts Centre Orchestra in Ottawa, the Orchestra dell’Accademia Nazionale di Santa Cecilia in Rome, the Orquesta Sinfónica Nacional de México, the Staatskapelle Halle, the Tucson Symphony, and the Virginia Symphony Orchestra, among others. His recitals and chamber performances – including appearances at the Aspen Music Festival, Cliburn Concerts, the Gulbenkian in Lisbon, the Royal Conservatory of Music in Toronto, and the Washington Performing Arts Society – comprise music by Frederic Rzewski, Julia Wolfe, Charles Ives, Mozart, a new commissioned work by John Supko, and much more.

In June of 2013, Tao kicked off the inaugural UNPLAY Festival at the powerHouse Arena in Brooklyn, which he curated and produced. The festival, designated a “critics’ pick” by Time Out New York and hailed by the New York Times for its “clever organization” and “endlessly engaging” performances, featured Conrad with guest artists performing a wide variety of new works. Across three nights encompassing electroacoustic music, performance art, youth ensembles, and much more, UNPLAY explored the fleeting ephemera of the Internet, the possibility of a 21st-century canon, and music’s role in social activism and critique. That month, Tao, a Warner Classics recording artist, also released Voyages, his first full-length for the label, declared a “spiky debut” by the New Yorker’s Alex Ross. Of the album, NPR wrote: “Tao proves himself to be a musician of deep intellectual and emotional means – as the thoughtful programming on this album…proclaims.” His next album, Pictures, which slots works by David Lang, Toru Takemitsu, Elliott Carter, and Tao himself alongside Mussorgsky’s familiar and beloved Pictures at an Exhibition, was hailed by The New York Times as “a fascinating album [by] a thoughtful artist and dynamic performer…played with enormous imagination, color and command.”

Tao’s career as composer has garnered an eight consecutive ASCAP Morton Gould Young Composer Awards and the Carlos Surinach Prize from BMI. In the 2013-14 season, while serving as the Dallas Symphony Orchestra’s artist-in-residence, Tao premiered his orchestral composition, The world is very different now. Commissioned in observance of the 50th
anniversary of the assassination of President John F. Kennedy, the work was described by the New York Times as “shapely and powerful.” Most recently, the Chamber Orchestra of Philadelphia commissioned a new work for piano, orchestra, and electronics, An Adjustment, which received its premiere in September 2015 with Tao at the piano. The Philadelphia Inquirer declared the piece abundant in “compositional magic,” a “most imaginative [integration of] spiritual post-Romanticism and ‘90s club music.”

Tao was born in Urbana, Illinois, in 1994. He has studied piano with Emilio del Rosario in Chicago and Yoheved Kaplinsky in New York, and composition with Christopher Theofanidis.