A Part of the WFMT Orchestra Series 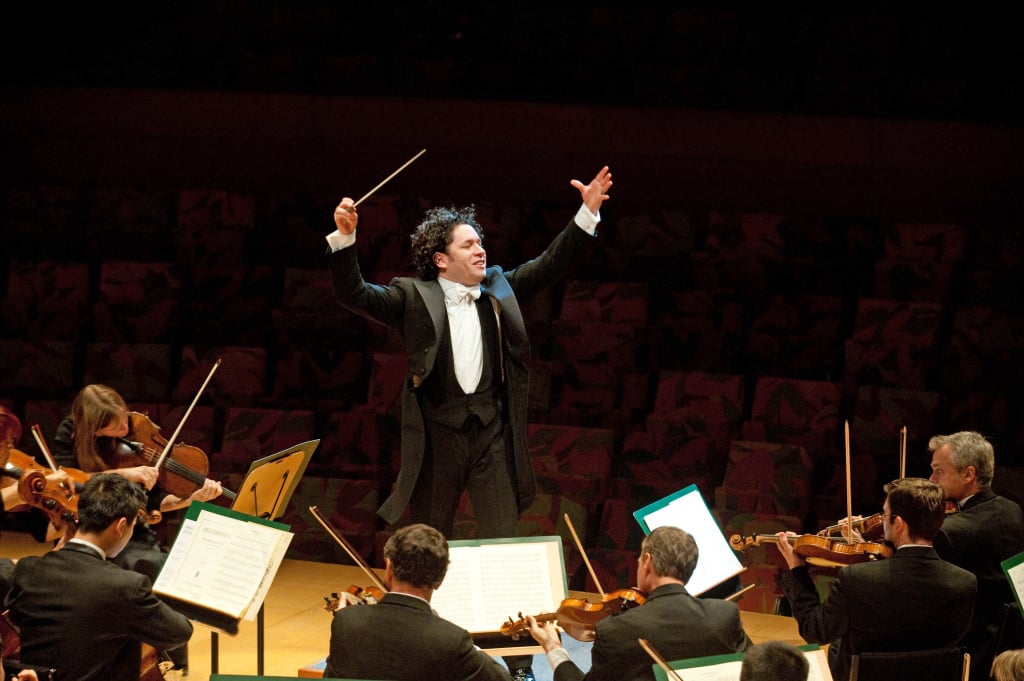 The Los Angeles Philharmonic, under the vibrant leadership of Music & Artistic Director Gustavo Dudamel, presents an inspiring array of music through a commitment to foundational works and adventurous explorations. Both at home and abroad, the LA Phil – recognized as one of the world’s outstanding orchestras – is leading the way in groundbreaking and diverse programming, on stage and in the community, that reflects the orchestra’s artistry and demonstrates its vision.

Now a part of the WFMT Orchestra Series, the 2022 season kicks off in late June, 2022 with a stunning set of 13 concert broadcasts. The series begins with a program of Schoenberg and Strauss featuring soprano Golda Schultz, with LA Phil Music Director Gustavo Dudamel at the podium. Other series highlights include:

About the LA Phil:

More than 250 concerts are either performed or presented by the LA Phil at the Frank Gehry-designed Walt Disney Concert Hall and the famed Hollywood Bowl. 2020 marked the first year that the LA Phil operated The Ford, continuing the historic venue’s longstanding tradition of providing access to performance experiences representative of L.A. County’s multifaceted communities. Collectively, the presentations at the LA Phil’s three iconic venues represent a breadth and depth unrivaled by other orchestras or cultural institutions.

During its winter season, with approximately 165 performances at Walt Disney Concert Hall, the LA Phil creates festivals, artist residencies, and other thematic programs designed to enhance the audience’s experience and delve further into artists’ or composers’ work. The organization’s commitment to the music of our time is also evident throughout the season in the groundbreaking Green Umbrella series and the LA Phil’s extensive commissioning initiatives. For its recent Centennial season (September 2018 through October 2019), the LA Phil invited people from Los Angeles and all around the world to join in a variety of celebrations, learning initiatives, artistic collaborations, and an unprecedented number of commissioned works, prompting the Los Angeles Times to hail, “No orchestra has been this ambitious, ever.”

Since 2003, the LA Phil’s winter home has been the inimitable Walt Disney Concert Hall. Praise for both the design and the acoustics of Walt Disney Concert Hall has been effusive, and the building embodies the energy, imagination, and creative spirit of the city of Los Angeles and its orchestra. As Time magazine noted, “With its curvaceous exterior and acoustically adroit interior, Gehry’s building bestowed on the city an important architectural landmark and proved that L.A. residents actually do go to the symphony,” while The Washington Post stated, “At last this orchestra has a hall worthy of its stature.”

The Ford is one of the oldest performing arts venues in Los Angeles, with an outdoor 1,200-seat amphitheater and a rich history dating back to 1920. Situated in a 32-acre park and under the stewardship of the Los Angeles Philharmonic, The Ford presents an eclectic summer season of music, dance, film, and family events that are reflective of the communities that comprise Los Angeles.

The orchestra’s involvement with Los Angeles extends beyond its venues, with performances in the schools, churches, and neighborhood centers of a vastly diverse community. Among its wide-ranging learning initiatives is YOLA (Youth Orchestra Los Angeles). Inspired by Venezuela’s revolutionary El Sistema, the LA Phil and its community partners seek to democratize music education by offering free, high-quality instrumental music instruction in under-resourced neighborhoods across Los Angeles. Through YOLA National, the LA Phil extends its reach nationwide and celebrates the work that’s done around the country by programs similar to YOLA and convenes young people each summer in Los Angeles at the YOLA National Festival. The Frank Gehry-designed Judith and Thomas L. Beckmen Center at Inglewood, YOLA’s first permanent, purpose-built facility, will serve 500 students annually from the surrounding community while also providing a facility that can bring together students from existing and future YOLA venues when it opens in August 2021.

The Los Angeles Philharmonic continues to broaden its audience by broadcasting concerts on radio and television. Thirteen concerts featuring performances from previous seasons and its acclaimed SOUND/STAGE online concert-video series will be broadcast in partnership with Classical KUSC and the WFMT Radio Network.

The Los Angeles Philharmonic was founded by William Andrews Clark, Jr., a millionaire and amateur musician, who established it as the city’s first permanent symphony orchestra in 1919. Walter Henry Rothwell became its first Music Director, serving until 1927; since then, 10 renowned conductors have served in that capacity: