For Memorial Day and Veterans Day 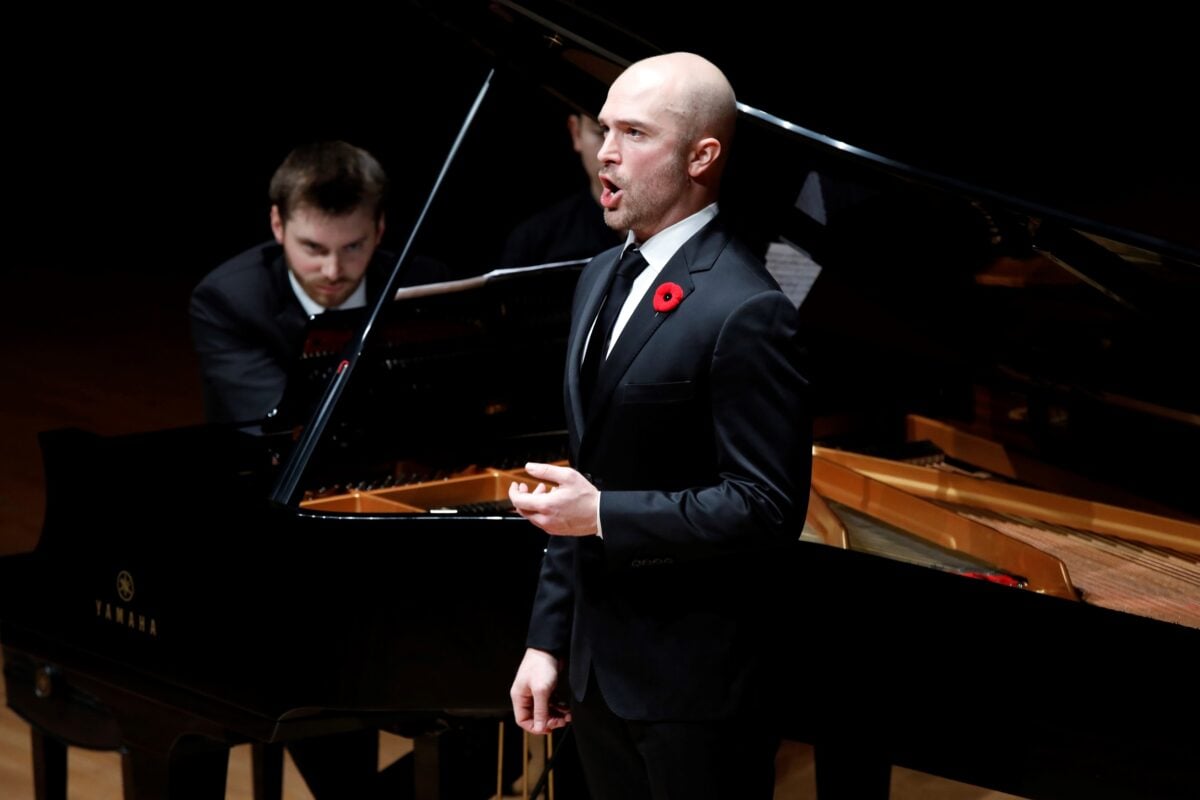 Memorial in Song with John Brancy and Peter Dugan

A program for Memorial Day/Veteran’s Day to honor those whose lives have been forever changed by war, including songs written by composers and poets who were soldiers themselves. Much of the music comes from the WWI era when the world was confronted with modern warfare for the very first time. The program is co-hosted and performed by GRAMMY Award winning baritone John Brancy and Peter Dugan, pianist and host of NPR’s From the Top, with testimonials from cultural historians and war veterans.

Selections come from the critically acclaimed album A Silent Night: A WWI Memorial in Song and the new release The Journey Home: Live from the Kennedy Center on Avie Records.

PLEASE NOTE: There are two versions of this show: one for Memorial Day and one for Veterans Day. Playlist is same for both versions; only introduction is different in each version.

*indicates a composer who served in WWI

John Brancy Biography
Grammy winning baritone John Brancy‘s intense musicality and communicative power place him among the finest of baritones of his generation.  Hailed by the New York Times as “a vibrant, resonant presence,” Brancy won First Prize in the Art Song Division of the 2018 Concours Musical International de Montreal — recognizing him as a premiere interpreter of art song repertoire in our time.  The New Jersey native also won First Prize in the 2018 Lotte Lenya Competition in New York, Second Prize at the 2017 Wigmore Hall Competition in London, the media prize in the 2017 Belvedere International Singing Competition in Moscow, and first prize in the Jensen Foundation Vocal Competition in 2015. He is also a past winner of the Marilyn Horne Song Competition and the Sullivan Foundation Grand Prize.

Of particular note, last season Brancy debuted with the LA Philharmonic in a new production of Meredith Monk’s ATLAS, directed by MacArthur Genius grant recipient, Yuval Sharon. Of the performance, Alex Ross of the New Yorker said “Brancy infused Magnussen with a frothing intensity”.  An artist of wide-ranging musical curiosity, Brancy’s recent activities include an eclectic mix of styles, platforms and periods. He made a return to Oper Frankfurt for a new production of Olga Neuwirth’s Lost Highway. The national tour of his critically acclaimed programs A Silent Night: A WWI Memorial in Song and Armistice: The Journey Home with collaborator Peter Dugan was presented at Alice Tully Hall, Stanford University, West Point Academy, the Smithsonian Institute, the US Naval Academy, Arizona Opera and the Kennedy Center.

Previous career highlights include debuts at Florida Grand Opera, singing the title role in Eugene Onegin, for Opera Omaha as the Steward in Dove’s Flight, and Opera National de Lorraine as Harlekin in Ariadne auf Naxos. He has also debuted with the Glyndebourne Festival Opera Tour as Malatesta in Don Pasquale, Demetrius in A Midsummer Night’s Dream for Pacific Opera Victoria and as soloist in Brahms’s German Requiem, Bach’s St. Matthew Passion, Handel’s Messiah, and Orff’s Carmina Burana.

Brancy has also been engaged by Semperoper Dresden, Edmonton Opera, Paris’s Théâtre du Chatelet, Opera Saratoga, and Opera San Antonio in works ranging from Tobias Picker’s The Fantastic Mr. Fox to Dandini in La Cenerentola to John Adams’s I Was Looking at the Ceiling and Then I Saw the Sky.  Recital credits include the Hugo Wolf Akademie, the New York Festival of Song with pianist Steven Blier, the Collaborative Arts Institute of Chicago, and Société d’art vocal de Montréal in collaboration with pianist Peter Dugan. He has also appeared with the San Francisco Symphony, Boston Symphony, Kansas City Symphony, and the Edmonton Symphony. Brancy holds a graduate degree from the Juilliard School in New York.

Peter Dugan Biography
Pianist Peter Dugan is heard across America as the host of NPR’s beloved program From the Top.  He has appeared as a soloist, recitalist, and chamber musician across North America and abroad, and can be heard as the piano soloist on a new release of Ives’ Fourth Symphony from Tilson Thomas and the San Francisco Symphony.  In 2020, he joined violinist Joshua Bell for At Home With Music, a national PBS broadcast and live album release on Sony Classical.  Prizing stylistic versatility as the hallmark of a 21st century musician, Mr. Dugan is equally at home in classical, jazz, and pop idioms.

A sought-after multi-genre artist, Mr. Dugan has performed in duos and trios with artists ranging from Itzhak Perlman and Renee Fleming to Jesse Colin Young and Glenn Close. The Wall Street Journal described Mr. Dugan’s collaboration with violinist Charles Yang as a “classical-meets-rockstar duo.” This season Yang and Dugan are Artists in Residence at New York’s Kaufman Music Center and the Cali School of Music at Montclair State University.

Mr. Dugan has been presented in chamber music recitals by Carnegie Hall, Chamber Music Society of Lincoln Center, Chamber Music Society of Palm Beach, Music at Menlo, Saratoga Performing Arts Center, and the Moab Music Festival.  He was a 2021 featured recitalist and lecturer for the National Conference on Keyboard Pedagogy, and has soloed with the San Francisco Symphony, Houston Symphony, Kansas City Symphony, and New World Symphony.

Mr. Dugan advocates the importance of music in the community and at all levels of society.  As a founding creator of Operation Superpower, a superhero opera for children, he has travelled to dozens of schools in the greater New York area, performing for students and encouraging them to use their talents – their superpowers – for good.  He is head of the Artist in Residence program at pianoSonoma and a founding faculty member of the Resonance and Soundboard Institutes at Honeywell Arts Academy.